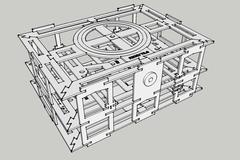 For those who doesn't know The Antikythera Mechanism is an artifact found in 1900 in the coast of the greek Antikythera island, once studied it was dated to be from 200 B.C. being the most ancient computer to be known so far. This a reconstruction made with the free information on the internet (since the scientists data are well kept on the museums). UPDATE! Added the sun gears, b1-b2-b3, with the sun axis, and internal axis (for moon gears later on). Added the washers and the sun dial.
Creative Commons Attribution Share Alike