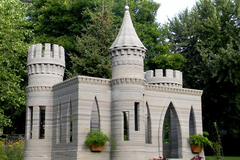 From Andrey:&nbsp;<div>﻿<br><div><br></div><div>﻿&nbsp;It has been two years since I first began toying with the idea of a 3D printer that was capable of constructing homes. In my vision of using 3D printers as new technology, I wanted a light, portable, and stable machine. First, I built a small 3D printer that used plastic for its main material, and from that, I started experimenting on enlarging the printer and using variations of cement mixes. Layering cement was an extremely difficult task- it required extensive tuning of the printer on a programming level, as well as using exact quantities for the cement mix. While testing the printer, I ran into obstacles (such as the nightmare of the extruder clogging) and discovered even further abilities of the printer, like that it can print much more than 50cm a day as I originally thought. I was able to calibrate the machine so that it prints nearly perfect layers now, and I played with various heights and widths of the cement layers. My current standard is 10 millimeters in height by 30 millimeters in width, but countless other options are available with just the click of a button. ​ &nbsp;<div>﻿<br><div><br></div><div>﻿&nbsp; This two year long journey has led me to build the world’s first 3D Printed Concrete Castle. Finally, it stands! &nbsp;<div>﻿<br><div><br></div><div>﻿&nbsp; Read more here: <a href="http://www.totalkustom.com/3d-castle-completed.html">http://www.totalkustom.com/3d-castle-completed.html</a></div></div>
Creative Commons Attribution Share Alike