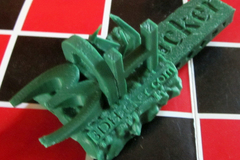 <p>See <a target="_blank" rel="nofollow" href="http://joesmakerbot.blogspot.com/2013/06/creating-test-print-object.html">http://joesmakerbot.blogspot.com/2013/06/creating-test-print-object.html</a> for more information.</p><p>See the annotated picture for details: </p><p>A. The organic area just looks pretty and shows how well your printer can print details like this. </p><p>B. The arms of the 3 each extend at different angles to test overhang. The top one extends at 60 degrees which may be a challenge for some to print but a properly calibrated machine should be able to handle it. The middle is at 45 degrees, even a badly calibrated machine should be able to do this, the bottom is 70 degrees, bonus points for making that work but it is expected to fail. </p><p>C. The D tests arches. With an arch this big it is likely to fail, but it's a question of how far it gets before failing. </p><p>D. The H tests bridging. </p><p>E. Each letter in "3DHacker.com" is the minimum safe size for text and 0.1mm higher than the one next to it testing relief and raised printing detail. If printing any less than 0.1mm layer heights it is possible there will not be a difference between too letters. Gaps that develop around the sunken letter can be fixed by reducing the number of shells at the cost of... well, shells. </p><p>F. The 3 spikes behind the H should be as tall as the H, however this test is designed to fail. Instead it will show how fine the details can be before your slicer will stop putting them in. </p><p>G. The main body and secondary block are joined by a filament diameter tester. If your filament diameter is too low you will not be able to mate the two parts. If it's too high they won't stay mated. </p><p>H. When mated relief lettering on the bottom of the print will demonstrate how well this can work, and the trouble that shells can cause for this. </p><p>I. On the top side of the second half the top wall demonstrates vertical holes with triangles, squares, on to circle. </p><p>J. In the middle is a shape designed to demonstrate how thin, flat organic shapes can turn out sometimes when designed horizontally like the legs of an octopus or a tail. This part may not be fixable simply by dropping shells, it's just one of those quirks to be aware of. </p><p>K. The bottom wall is designed as a fail test where the wall is getting increasingly thinner until it's too thin to print, but at what point will your 3D printer stop printing. </p><p>It's a bit bigger than some tests but it covers a lot.</p>
Creative Commons Attribution Noncommercial Share Alike