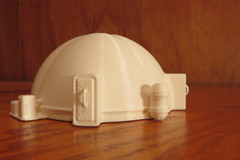 <div>This is my interpretation of the Hab for the Ares 3 mission as described by Andy Weir in his recent novel, The Martian. The Hab is the main living space for a team of about six astronauts for a month or two on Mars. Or, for one astronaut for much longer. <br><br>I modeled the Hab at actual size (92 square feet of floor space, or thereabouts). The modeled elements include: three airlocks (phone booth size a meter across inside), two O2 tanks, oxygenator, water reclaimer, communications dish (not present during Watney's stay), antennae array (modeled intact), and of course, the Hab itself. &nbsp;&nbsp;</div><div><br></div><div><br>The Hab dome is formed by canvas reinforced with carbon fibers. Poles form the basic shape, but the structure is largely supported by the pressure of the atmosphere inside the Hab. The floor is a "rigid, folding material." &nbsp;</div><div><br><br></div><div>If you catch any details I'm missing or anything I fudged, post it up! Of course, you could also download the model and change it yourself, too. ;-) Oh, and go read the book! &nbsp;<br><br>Modeled in Autodesk Fusion 360 with a quick trip to Solidworks at the end.&nbsp;</div>
Creative Commons Attribution Share Alike