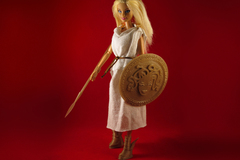 <div><p>Sing, O muse, of science and of art and of trials and tessellation and tribulations, of dawn-laboring Zheng, and Barbie of the slim ankles. </p> <p>Acolytes rush to Delphi's shimmering pool to behold the emerging vision. Great Hera! A Kickstarter begins! </p> <p>With Faire Play, I'm making 3D printed medieval armor for Barbie dolls. To the goddess of Wisdom I offer this Athena Makeover Kit as tribute, so that She may guide this campaign to success. </p> <p><a rel="" target="" href="http://kck.st/O0BDk2">Watch Barbie's debut in full battle gear</a> in the Kickstarter video, and support Open Source design while you're there. http://kck.st/O0BDk2</p> <p>The spear and aegis should clip on to pretty much any doll that's roughly Barbie-sized, but the boots are designed specifically for a doll in the <a rel="" target="" href="http://amzn.to/1dC4m8j">Barbie Fashionistas</a> line. </p> <p>I've got the prototype medieval armor finished and reliably printing on an FDM printer, now I just need to make it look fabulous. I'll be posting updates at <a rel="" target="" href="http://faireplay.zheng3.com">faireplay.zheng3.com</a> over the next couple of weeks. <br></p></div>
Creative Commons Attribution Share Alike