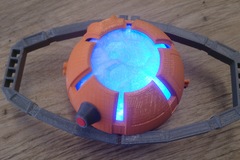 <p>Print one of each and put together.</p><p>All parts can be snap fitted with the exception of the arms which will need gluing or a dab of acetone.</p><p>I printed it with the following settings:</p><p>Battery pack back ball, frontball and battery door: orange PLA at 0.2mm layer height, 10% infill, 2 shells. Print the frontball with support, the rest without.</p><p>Arms: Gray or silver ABS at 0.2mm layer height, 10% infill, 2 shells with support.</p><p>Nubbin: Silver PLA at 0.1mm layer height, 15% infill, 2 shells, no support.</p><p>red part of nubbin: red PLA at 0.1mm layer height, 15% infill, 2 shells, no support but you may want to use a raft to make it easier to get it off without damaging it.</p><p>Partition clips: white PLA af 0.2mm layer height, 10% infill, 2 shells with support.</p><p>Centre crystal: Translucent blue at 0.2mm layer height, 10% infill, 2 shells with support.</p><p>For the LEDs, I bought a string of 10 LEDs on a battery pack (5 would probably have been better). I removed the wiring and connectors from the battery pack and put them into the battery pack back ball.</p><p>To assemble:</p><p>Push the red part of nubbin into the nubbin. This will be a very tight fit so won't need gluing.</p><p>Push the nubbin into the frontball. This will also be a very tight fit and may need some persuasion. The surface of the nubbin that meets up with the curved face of the frontball has been designed with the curvature of the ball so you may need to rotate it a little to be able to have a flush fit.</p><p>Push the centre crystal into the front ball, it has flat sides that help to do this and you shouldn't have to use much, if any force.</p><p>Push one of the partition clips into the front ball with the clips sticking out. Put your LEDs in and then put the other partition clip in place making sure that the wires for the LEDs is coming through the middle gap.</p><p>Make sure that you have wired up your printed battery pack with the on/off switch sticking out of the side and bunch up the extra wiring in the space provided. There is a very thin guide for the LED wires to go above the batteries and into the the front part.</p><p>Push the front and back together and they should clip into place and be held tightly.</p><p>Use Acetone or glue to put the arms on.</p>
Creative Commons Attribution Share Alike

By
The 3d Print House