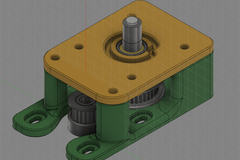 <p>This is a bolt-on upgrade for the UM2 with a belt-drive, it does increase the pushing power of the relatively weak UM2 Feeder motor, and also remove the thermal coupling between the feeder motor and the knurled bolt, since it has been shown that excessive temperatures at the bolt caused by high current can decrease the performance of the feeder.<br><br>It functions as a gearbox that moves the knurled bolt a few centimeters outwards and upwards, and provides a new nema17 hole pattern which means that it will work with any feeder that is designed for the standard feeder position at the UM2, including the IRobertI&nbsp;feeder and the original UM2 feeder, it gives you a gearing of 1.8:1 and removes almost all thermal coupling between the motor and the knurled bolt.</p><p>The only change needed to use this geared feeder upgrade is to change steps per mm in Marlin to the original value times 1.8, thats it!</p><p>You need to print one base, one plate and two washers.</p><p>Also included in the files are a Bearing Carrier to be able to use MF105 (5x10x4mm) bearings instead of the MF695 (since i only had MF105 bearings at home while building the prototype)</p><p>If you are to use it with the |Robert| V2 feeder, it is recommended to print the feeder mirrored, that way it will not interfere with the original spool holder, this requires you to also change the direction of the feeder in the firmware. This change also have a the added feature of lowering the friction slightly in the bowden tube since the knurled surface of the filament will be on the inside instead of the outside of the bowden tube's curve.</p>
Creative Commons Attribution Share Alike