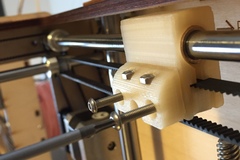 Update 11/01/16 Added a working version of UM3 slideblocks for 608T long belts. Tested, works. Not for newbs =) Update 20/11/16 Added a thinner slideblocks that can be used even on a um2 and even um3, ofc it doesn't make sense to change the belts on a um3, but I wanted to test how thin the design could be. They use M3 12mm screws and they leave the maximum print area available. Also tested the long um2 shafts and while the screw system I designed to hold the shafts is a bit overkill, it works (but isn't easy to fix the shafts at all), but overall, it works. Update 24/08/16 Uploaded the V4, hopefully final version. Been using it for a month on 2 machines and it's working perfectly. V3 had a few silly mistakes. - Part untested yet, attaching um2 shafts. I have moved the Z endstop to the bottom (check my other designs) so to finish the total transition from umo+ to um2 style it just need a small adapter to change X/Y endstop placement, but I'm not sure yet if only X or both. Update 19/05/16: Added V3 of the slideblocks. Muuch improved umo shaft grip, and fixed some stuff with the bottom slideblock. V3 now has improved the GT2/MXL belt grip and now it has a hole for M3x10mm screw to 'Grip' the um2 shaft. It's very important to 'mark' the holes before assembling everything with a screw or with a m3 cap (if you use pla with a screw it's very easy and fast to do). I'm running with this with a um2 hotend with umo shafts and it's printing just fine. BUT THIS IT'S an unfinished design (that's why the lack of instructions). So I'll keep updating it. I have not tested it yet with um2 shafts. But after doing basic test's to really use more print area on UMO+ the x/y endstops must be moved to a different location on the printer, pretty much to the same position that the um2 uses. That also means that to use the bigger print area this need's custom firmware, or @Amedee builder ttp://bultimaker.bulles.eu/ using x/y inverted probably. BUT I haven't tested that path yet since that requieres much more time. So far umo shafts have a perfect grip with the addon and it's printing nicely. AFAIK it grabs the shafts with the perfect amount of force, but if your hotend falls it's not on me ! :D For any questions drop a msg here or on ultimaker forums.</div><div><br></div><div><br></div><div><b>Neotko / sugarpop! store</b></div><div><b><br></b></div><div><br></div><div>Design Based on the original STEP files of the slideblocks of UM2 and Greatly based on the fantastic Twisterblocks by Chopmeister <a rel="nofollow" target="_blank" href="https://www.youmagine.com/designs/twisterblocks">https://www.youmagine.com/designs/twisterblocks</a></div>
Creative Commons Attribution Share Alike