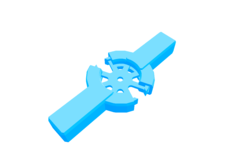 An OpenSCAD model of a cable passer, or shaft passer. The concept of a cable passer has been around for quite some time. The idea is that it would let one cable or rod pass through another, while both are holding tension. The only evidence that I have found that they were ever actually constructed, however, is a passing comment that Richard Feynman made in one of his books. The cable passer would need to be shaped very precisely, with interlocking parts that show off the capabilities of a 3D printer. I do not currently have access to a 3D printer, so can't say whether it will print or not. It will likely take some work to get it moving. The file is fully parametric, but I haven't created any variables so it may not be easy to edit. One thing that you may want to change is the precision of the circles ($fn).
Creative Commons Attribution Share Alike