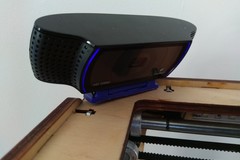 The standard mount on the Logitech C920 is fine for attaching at the top of your monitor on maybe on a desk or whatever, but it doesn't sit very well on the corner of an Ultimaker and most importantly doesn't allow you to angle the camera downwards enough to get the tip of the extruder to be in the middle of the screen. These two parts screw together and uses a small grub screw to hold the camera to it, and screws to the Ultimaker itself. You can angle it at 0-60 degrees, the head won't bump into it if it comes near, and it won't fall off midway through a print. The hinge is formed by screws, and so they can adjust the tension on the hinge. This is an area which may need a little more development as the screws seem to go soft after a while. (I couldn't get the online 'assembly editor' thing to actually save what I'd arranged, so I took a couple of screen shots of it instead)
Creative Commons Attribution Share Alike