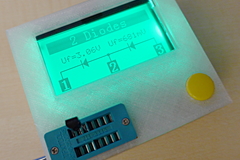 <p>In my toolshed are lots of unidentified electronic components swirling around. They all land in a box labelled "to be sorted ... if time". On EBay they sell so called component testers, where you can easily put any component quickly in a zif(tm)-socket and the devices identifies the component and its key parameters. This device was a cheap buy (18€) and arrived from Hongkong without any customs hazzle after 10 days. So I needed a proper case to put this thing into.</p><p>So I came up with an openSCAD design which generates a two part case which fits together without any tools and screws.</p><p><br></p><p>You can either use the two stl files (rotate the cover by 180 degrees) or generate - probably modified - files using openSCAD. In the scad file are both parts include, you would have to comment out/in the one you want to generate.</p><p>I printed both from PLA with 60mm/s and 20% infill on my Ultimaker 2. You have to rotate the cover (kompo_deckel.stl) by 180 degrees.</p>
Creative Commons Attribution Share Alike