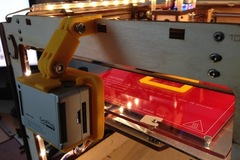 <p>First I just wanted to make the upmost holder but later on I modelled the rest.</p><p>I tried to print Micha's skeleton but the bottom half broken a couple of times so I decided instead of wasting more filament I'll build my own. Note: the skeleton on the image was v1, without the claw. Finally I put a claw to the bottom part too.</p>
Creative Commons Attribution Share Alike