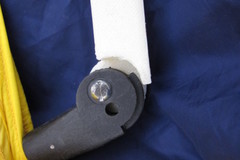 EDIT: This was my first design. Since then I've realized that it would be better to print this on its side so that the groove and notch are not left hanging. I'd suggest rotating it.<br><br>If anyone actually wants to make one of these, leave a comment. I redid it in OpenSCAD as an exercise; it only needs a little tweaking to make it right, if anyone wants it I'll post it as a new version.<br><br>I printed in ABS since PLA might not be a good idea since it begins to soften at about 60*C and a tent in the sun might get that warm.<br><br>Print, clean up (the circular overhang groove and ridge don't print very well for me but it's good enough). Drill the two holes - they're sized a bit too small so they can be drilled just slightly for a really tight fit.<br><br>I assembled the two joint halves with a 10-24 screw and nut, then hammered the screw down so the nut couldn't come off.
Creative Commons Public Domain Dedication