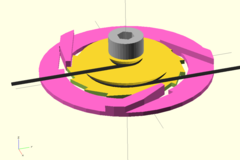 <p>Concept for e-Nable prosthetic hands to have more force for weaker wrists that also have a limited bending/travel range. This is made possible with a pair of pulleys combined with a ratcheting mechanism. This would allow gradual increase of the grip of the prosthetic fingers to increase as you bend the wrist several times.<br></p><p>This will act like two pulleys on one axle. Each pulley has a different diameter. If you put cable across both of them, each pointing in a different direction, you can pull one of them and get more strength on the one that has the smaller hub.</p><p> <a target="_blank" rel="nofollow" href="https://www.youtube.com/watch?v=K9eESS9ZBsU">https://www.youtube.com/watch?v=K9eESS9ZBsU</a> </p><p>The cables should fit through the holes if they're 0.4 mm, but you may want to increase its size a bit if your cables are bigger.</p><p>Compared to directly pulling the cables, this will duplicate the force if you make the same amount of bending movement twice. You can also decide on a 1:3 ratio for 3 times the strength. In any case, if you can only bend a little, you can do it three times and still grip completely.&nbsp;</p><p>The pink part would be part of the fixed part of the prosthetic the pulleys that rotate within it need a 3mm bolt as an axle to rotate on, which should also be a fixed part.</p><p>A release mechanism hasn't been developed yet, but that shouldn't be too hard. Also, it needs to be tested and the spacings/sizes adjusted. Feel free to continue where I left it.</p><p>Updates:</p><p>V1.1 now it has animation and also the cables are rendered. You see the cables move with a ratio that corresponds with the pulleys. The force ratio is inverted (slow moving cable has amplified force)</p><p>V1.2 made the&nbsp;part&nbsp;a&nbsp;bit&nbsp;bigger,&nbsp;made the&nbsp;teeth&nbsp;deeper and the&nbsp;pawls&nbsp;thinner and&nbsp;longer. Made the&nbsp;ratchet&nbsp;well&nbsp;a&nbsp;bit&nbsp;fatter (stronger) and&nbsp;the holes for&nbsp;the&nbsp;cables&nbsp;wider.</p>
Creative Commons Attribution Share Alike