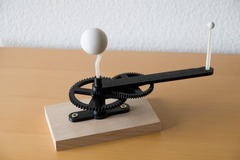 I constructed the model true to scale except of the distance of Moon Earth. In reality, the distance Earth Moon is twice as size, but then the rod has become too long. I could have made the moon and the Earth half as big, but the moon would be barely recognizable. That's why I chose this solution. I have designed the gear ratio so that when the moon turns once, the Earth turns 29.5 times around its own axis. The gear mechanism was designed to be the same as the direction of rotation of Earth and moon. (as in reality) If you light the model with a flashlight, you can see the shadow formation of the Earth and the moon very well. It is best to screw the model with 2 countersunk head screws (M5) onto a wooden plate etc. In order to spin the model, you have to spin the earth adapter or the gear-wheel 2/3. When you assemble the model it is very important that you don't screw the slotted screw too tightly. The gear must be rotate freely. For the model you need the following material: 2 countersunk head screws M5 Print each part once
Creative Commons Attribution Share Alike