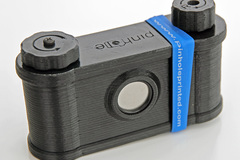 <p>After doing my “Pinhole Printed” Kickstarter project in 2013, I wanted to create a new 3D printed pinhole camera that anyone with access to a 3D printer can make.&nbsp; I’ve designed a number of 3D printed cameras, including the very popular Flyer 6x6 and Clipper 6x18 cameras which are now in the New Mexico History Museum and in the Poetics of Light exhibition running through January 10, 2016.&nbsp;</p><p>The Easy 35 camera satisfies my goals of fast, cheap, and easy to make. Based on 35mm film, the Easy 35 can be printed in half the time of a Flyer 6x6 and needs just a pinhole to assemble (at a bare minimum).&nbsp; A rubber band secures the top and black tape is used as the shutter. Such a camera appeals both to photographers and to educators wanting to teach principles of photography to youths. If you have a 3D printer, perhaps you can make some for a local school’s science class.</p><p>The Easy 35 body is printed as one piece, incorporating the film chambers, rails, internal light baffles, and pinhole mount.&nbsp; Such a camera body is only possible with a 3D printer, since it cannot be done in one piece with conventional manufacturing techniques.</p><p>The Easy 35 camera is released as open source, using the Creative Commons CC-BY-SA 4.0 license, meaning anyone is free to make them or even sell them, as long as attribution is given to the designer and any remixes or derivations are shared alike.&nbsp;</p><p> </p><p>Details on the Easy 35 camera can be found on <a rel="nofollow" target="_blank" href="http://www.pinholeprinted.com">www.pinholeprinted.com</a>.<br> </p>
Creative Commons Attribution Share Alike