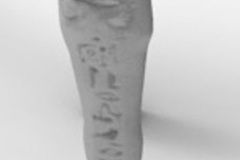 This 3D model is a laser scan of an Egyptian ushabti figurine from the collections of the National Museum Cardiff. The original figurine was made about 664-525 BC. Ushabti figures served as funerary figurines in Ancient Egypt. They were placed in tombs and were intended to carry out any tasks involving heavy manual labour required of the deceased in the afterlife. This ushabti figure is inscribed with a spell to provide food for its master or mistress. The name ‘shabti’ or ‘ushabt’ means answerer and the little figure was supposed to answer when called to work. In ancient Egypt this would have meant plowing the fields, sowing and harvesting crops to produce food. The ushabti was meant to serve the deceased for all eternity. Live in ancient Egypt was not always easy, the ancient Egyptians worked hard to build temples and pyramids, and to produce food on their fields. Of course everyone wanted ushabti servants so that they could finally have a rest in the afterlife, and ushabtis were produced in huge numbers in ancient Egypt. They are the most numerous of ancient Egyptian antiquities to survive.
Creative Commons Attribution Noncommercial No Derivatives