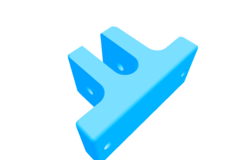 <p>Going to gather here various redesigned parts for the Electron3d printer. Added in the order of failure / installation.</p><p><b>Y idler support</b> <br></p><p>This was first part to fail by delamination, due to it being printed in the wrong orientation; I held the thing in place with zip ties while I printed this replacement</p><p><b>Better air duct</b><br></p><p><a href="https://www.youmagine.com/designs/better-fan-duct-for-electron3d-prusa-i3-printer" target="_blank" rel="nofollow">https://www.youmagine.com/designs/better-fan-duct-for-electron3d-prusa-i3-printer</a><br></p><p><b>3 point bed support</b><br></p><p>The aluminium plate tends to get twisted, resulting in areas where the print won't stick because the bed is too low. <br></p><p>The heater PCB has the necessary hole, I needed to drill and countersink a hole in the aluminium plate, make a notch in the back bracket to make room for the adjustment screw, and print the bracket.<br></p><p><b>X axis, idler end</b> <br></p><p>This was the second part to fail due to really poor design: the inertial forces from the (heavy-ish) X carriage and the belt tension were handled by ~2mm pf PLA printed with, like, 10% infill and 2 shells (bad), transferred through the bearings into the vertical slides (bad) and, after failure, into the leadscrews (very bad, as these are not hardened and will bend).</p><p> My version uses some screws to transfer the forces into the X slide rods (where they act longitudinally), and contains a belt tensioner.<br></p><b>Plastic bushings for Y axis</b><br>The original bearings were pretty noisy and had lots of play inside of the housings, so the whole bed would vibrate like crazy; I got a random version off Thingiverse and printed them in (red) Colorfabb XT.<br><br>The ones I got are a bit loose on the rods (~0.5mm play, but much better than the ball bearings) and the OD came out somewhat larger than 15mm, but adjusting them so they would press fit into the original aluminium housings was a 5 minute job on the lathe (my point: find some better designed ones, or get the STL from <a href="http://www.igus-cad.com/default.aspx?cul=en-GB" target="_blank" rel="nofollow">http://www.igus-cad.com/default.aspx?cul=en-GB</a>; btw, Igus also sell filament, but I'm afraid to ask how much it costs).<br><br>The result? sweet silence! I plan to replace the X bearings as well.
GPLv3