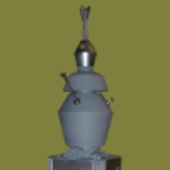 Stimpack (or Stimpak) from Fallout 4, modeled from scratch in Blender.

Stimpack (or Stimpak) from Fallout 4, modeled from scratch in Blender.

Note: The original game model had a slightly bent clip on the end of the left arm. I've recreated this, but I've also included a "straight" version that mirrors the right clip.

I did not use supports when I printed the gauge, and it shows in the pic of the unfinished model, so I'd strongly recommend using them.

I also urge you to print the tabs on the ends of the arms in their upright position, rather than laying flat, because that will print the layers along the curve -- meaning that if the part is flexed, it should bend somewhat rather than simply snapping immediately between the layers.

I used a series of successively finer grit sandpapers, from 120 down to 2000, to remove the layer lines (except where the paper label would be covering). I avoided sanding any surfaces with very fine detail on them (the knurled connector and "dials" at the bottom of the gauge section, the vertical bar on the front of the gauge section, the knurled section of the needle holder, and the ribbed section at the top of the barrel).

I used XTC-3D on the "tabs", as I feared they might be too fragile to sand. Because the surface was already fairly smooth, it sort of beaded up on the large flat areas. This worked to make the surface look damaged, so I left it that way.

I covered the whole model with primer (Alclad black primer and microfiller), then used 2000 grit sandpaper to smooth the finish again.

I covered the whole thing (except the "tabs" that go on the end of the arms) in rust color, using an airbrush: an overall base coat of Vallejo mahogany brown, and then varied the tone by lightly airbrushing other browns in areas. I also put some brown colors on a toothbrush, and scraped a toothpick across the bristles, to spatter droplets on the surface.

Once the paint had dried, I took a paintbrush and moistened the surface where I wanted rust to show, sprinkling coarse salt over each wet patch immediately after making it. The salt adhered to the water. I let that sit overnight to dry.

5. Top paints (airbrush)
I used Alclad II paints for the metal bits: steel for the vertical bar on the gauge portion and the arm bar; and dark aluminum for the "tabs", knurled connector, ribbed section, rectangular sections on the top of the gauge (where the wires will be inserted into) and the bottom half of the needle holder (the knurled section and the end tube).

Then I put on the non-metallic paints, using Vallejo German Grey for the gauge section, and neutral grey for the barrel and endcap. For the most part, the salt was covering the joins between paint sections, so I didn't bother with masking tape; for the sections that weren't covered by salt, I just used a piece of paper to mask off what I didn't want to paint.

Using a small, stiff brush, I cleaned off all the salt, revealing the "rust" beneath it.

I covered the "knobs" towards the bottom of the gauge section with gloss black Model Masters paint, using a small brush.

The inside of the gauge section has a flat shelf behind where the arm bar will rest, to give it a good surface to adhere to. I sanded off the paint in the center back of the arm bar, and put a thin layer of epoxy there, carefully sliding it into the holes in the gauge section so as not to scrape any epoxy off onto the outside. (Or that was my intent, I wasn't entirely successful.)

After that had dried, I put a spot of epoxy on the end of each arm (in the back, where there's a small depression), and glued on the "tabs". To hold each tab at the proper angle, I folded a piece of paper until it was the right thickness, slid it in between the front of the arm and the tab, then clamped it in place. There's a small protrusion on the tab that fits into the depression on the arm.

I printed out a sheet of labels, and covered the back with two coats of Mod Podge. After that had dried, I cut out the tiny holes in some of the "aged" versions of the labels using a swiveling craft knife. Once I'd finally got one I was happy with, I cut it out of the sheet with scissors.

I had a small spool of copper craft wire of a suitable diameter. I tried aging it, but it apparently had some sort of anti-tarnish coating or something. Oh well. I took two lengths of wire, wrapped one end of each through the slots on the top of the "tabs", and glued the other end into the holes at the top of the gauge. (In the game model, the left wire enters the top hole; the right wire enters the bottom hole.)

When I originally modeled the barrel, I used the dimensions of a glass vial I had in my junk drawer (19mm diameter by 65mm). Upon deciding to make a couple of Stimpacks, I discovered that these were hard to obtain in lots of anything less than 100 vials, which wasn't optimal, but I discovered that a test tube commonly sold in hobby stores (15mm x 100mm) could be cut down to 80mm and, with three layers of Tamiya masking tape around each end, fit quite securely into the barrel.

To cut it down, I wrapped some tape around the tube where I wanted to cut it, then used a diamond bead reamer to score a line all the way around. Removing the tape, I heated the end in a candle flame, then plunged it into cold water. It didn't crack, but the end was brittle enough to be removed with a pair of needlenose pliers, fairly cleanly.

I then sanded the cut end until it was smooth.

I filled the remaining tube with a red calligraphy ink that looks very much like blood (Noodler's "Qin Shi Huan" ink), leaving about a centimeter of space at the top. I pressed in the rubber stopper as far as it would go, then cut off the remainder with an X-Acto knife. Then I pushed the stopper in down a few more millimeters, and filled in the empty space with epoxy.

13. "Needle" and final assembly
A long quilting pin with a round plastic head served as the "needle". I simply pushed it through the hole in the endcap. It butts up against the rounded end of the test tube, so I didn't require any adhesive to keep it in place (and can be replaced with a half-length pin with a rounded end for "injection" photos).

I inserted the test tube into the barrel, rounded end away from the gauge end, pressed the endcap into place (it's a snug fit), then screwed the barrel into the gauge.

Ryan Wyse added this to the Fallout collection 8 months ago

pretorianarg added this to the Fan collection over 1 year ago

azndudedv added this to the Props collection about 2 years ago

sNkPhalanx added this to the Models collection almost 5 years ago

ask4help added this to the General collection almost 6 years ago

Shipbrook published this design over 6 years ago