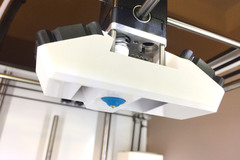 <p>This fan mount is a modification of https://www.youmagine.com/designs/ultimaker-2-fan-shroud.</p> <p>The nozzle hole in cor3ys' design was too small to accommodate the wrench that was included with my Olsson block kit, so I enlarged it a bit. I also reshaped the air ducts to be larger and less focused on the nozzle (more like those on the stock Ultimaker 2 fan mount), and changed the screw holes to use the screws that came with the Ultimaker 2.</p> <p>Before uploading, I tested the fan mount with PLA at 210 degrees without any problems. However, I later tried it with XT at 245 degrees, and experienced the dreaded Temp Error. So if you're printing at high nozzle temperatures, you may have to wait for the nozzle to get several mm off the bed before reaching max speed with the fans, otherwise the bed might deflect too much air back to the heater block.</p> <p><b>UPDATE 1:</b> I added v2 to the documents list which shortens the arms at the top of the mount by 2 mm. Printed with XT, it's holding up at 245 degrees and handles the temp error better.</p> <p><b>UPDATE 2:</b> v3 allows the option of eliminating the eight screws that hold the fans in place, borrowing from Izzy's brilliant design (https://www.youmagine.com/designs/um2-fan-duct-v2). Printed with 0.1mm layers, the fans fit perfectly. Insert the top of the fan first, then push the bottom in.</p> <p><b>UPDATE 3:</b> The consensus seems to be that orienting the fans horizontally produces the best airflow, so I decided to do that with v4. However, making them completely horizontal would most likely have the fan mount crash into the side of the printer, so I went as horizontal as I could with them. I also made the right air vent wider, because I noticed I was getting less airflow on that side, due to the distance and angle.</p> <p><b>UPDATE 4:</b> Just for the heck of it, I decided to order some E3D silicone "socks" (http://e3d-online.com/Socks-Launch) to see if I could make them work with my fan mount. Coincidentally, they fit perfectly into the nozzle hole in my design. The only thing I needed to do was cut off the the tabs sticking up from the back of the sock (see photo), because the Olsson block is longer. Other than that, it fits right in, and the fan mount holds it in place. With the sock installed, I can run my fans as high as I want without worrying about air being deflected back up into the heater block which can cause inconsistent layers. Unfortunately, this addition defeats the quick nozzle change feature of the original fan mount design. <p>By the way, if you haven't upgraded your heater cartridge to 35W, I highly recommend it. Completely eliminates the temp error, even with thick layers and larger nozzle sizes.</p> <p><b>UPDATE 5:</b> I decided to widen the base of the fan mount (front to back) by a few mm to cool a wider area. As a positive side-effect, the small shelf extending from the back does a better job of shielding the heater block from deflected air, and it doesn't need to stick out as much, making it less prone to melting/sagging. Printed in ABS, it holds up very well. I've been running this latest version (v5) for quite a while now, and it's been working very nicely for me. I don't use the silicone "socks" anymore, because I don't think they make an appreciable difference with this new design in terms of protecting the heater block from air deflections. I also prefer having the quick nozzle change option. For anyone who has problems with the normal version hitting the side of the printer, I've also uploaded a "narrow" version which uses the original, more vertical fan angle.</p>
Creative Commons Attribution Share Alike