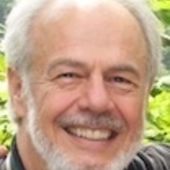 The Filament Nudger is a hack to reduce the number of times the 3Doodler stalls or jams by providing a continuously nudging force on the filament from a pair of rubber bands.

For various reasons, the 3Doodler sometimes stops extruding. This can happen with any 3D Printer. However, the 3Doodler is exceptionally easy to get going again by giving the filament a gentle nudge. The Filament Nudger is a hack to reduce the number of times the 3Doodler stalls or jams by providing a continuously nudging force on the filament.  It is especially useful when using the same 3mm coiled filament that you use in a regular 3D printer, for without the Nudger the curvature of the filament provides friction that induces stalling.

The automatic Filament Nudger was designed to be powered by a pair of rubber bands, and it is cocked by pulling back on the Filament Grabber mechanism.
The Nudger works with or without the Phaser Handle described in a previous blog http://www.interlockroc.org/2014/03/10/how-to-3d-print-a-handle-and-trigger-for-the-3doodler-and-to-make-it-look-like-a-phaser/.

The Grabber works like a 1-way clutch, pulling the filament toward the 3Doodler but releasing the filament when pulled in the other direction or when the Grabber bumps the back of the 3Doodler. The force applied by the rubber bands is effective in keeping the extruder going, but is not strong enough to prevent the filament retraction which conveniently keeps the 3Doodler from oozing between extrusions like a glue gun does.

When used with the filament sticks provided by 3Doodler, the Filament Nudger has the benefits of (1) reducing extruder stalls and also (2) it lets you install a new stick any time after the trailing end of a stick disappears into the 3Doodler. Without the Nudger, a new stick may fall out when the 3Doodler is tipped upward before the new stick is engaged, and this can be annoying.

With the Filament Nudger as a pre-feeder, we have been successfully using the same 3mm coiled filament that is used by MacGyvrBot (and other 3D printers). Warning: the use of such materials is not recommended by 3Doodler, and using any unauthorized materials will void the 3Doodler warranty!

1.   Create a hinge pin for the grabber with a small piece of 3mm filament, and put button heads on the pin with the 3Doodler or a hot iron.

2.   Attach the Frame to the 3Doodler with a ZipTie.

4.   Attach the rubber bands to the Grabber and hook over the Frame as shown.

Skip Meetze published this design over 8 years ago