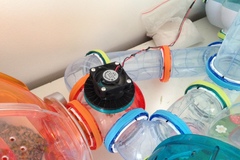 <p>You can use this to mount 4cm x 4cm fans to a Habitrail cage and keep your hamster more cozy. One of these per single cage seems to work fine. I have two cages that I've attached together with extra pieces, so I've made up two fans. Keeps temperatures more even inside the cage but more importantly, it keeps the bedding much fresher, reducing the number of times I have to clean it. My hamster also tends to look healthier and cleaner when the fans run, and he plays more.<br><br>The motivation for making this project was noticing that my hamster would get sweaty hot just from sleeping in his nest. This was in summer. In winter, I noticed that the cage was colder than the outside circulating air (checked it with a thermocouple device). Poor guy. I put the fans on his cage and all this went away.<br></p><p>This project comes with supports already. It does need them, but it doesn't need the gargantuan support system that some slicers like to build. Anyway, just download and print and don't forget to snap the supports off after. I'll admit it's not a pretty print, but it wasn't meant to be. You may need to resize the screw holes to suit. The fans I used can be bought here: <a href="http://www.eckertech.com/40mm-fan/" rel="nofollow" target="_blank">http://www.eckertech.com/40mm-fan/</a><br><br>Yes, they are 12V fans. Don't worry about that. They'll run at fairly low voltages (definitely 5V). I actually had a hard time finding fans this size for a decent price. This size is perfect for Habitrail cages.<br><br>The 3D printed part is designed to be glued onto a Habitrail Ovo Window. Using your smallest drill bit, first drill a large number of holes into the Window. Do so from the inside out, as it will leave little bits of plastic sticking out and you don't want your hamster to bite these. Also, you need to make sure your smallest drill bit is small enough so that little noses won't fit into the holes enough to allow chewing. Clean the Window up a bit after drilling and use super glue to attach the larger side of the 3D printed part (fear not if it fills in the holes on the side of the Window as this is actually helpful). Make sure the holes for the fan mount are NOT on the glued side. The idea is that the fan will be held out away from the surface of the Window so that little noses can't get into it. Be liberal with the glue. Let it dry over night.<br><br>It really doesn't matter which way you mount the fans. Decide if you want the air blowing in or out. Personally I prefer to blow the air out. There are enough air holes in the cage to allow good air flow even if you have multiple fans blowing the same direction but mounted at opposite ends.<br><br>Wiring the fans up is very easy - they really just need a power supply and nothing else. You can keep the project really simple and just use a battery pack if you like. I did this for a few months until I got tired of changing batteries. Just keep in mind that at around 5V, one fan will require about 50 mA (so, not Arduino-friendly unless you run it off the 5V supply directly).<br><br>If you want to replicate what I did, you'll need the BOM. My project uses 2 fans (combined max. 100 mA @ 5V) but I have a double-sized cage. Do not mount the fans anywhere that they can make a mess if the hamster drops something into them. They work best if put on top or at the end of something long. They won't break if the hamster drops something into them but it could get gross. Try not to mount them really close to your hamster's nest as they do make a bit of noise (although the hamster will probably ignore it after an initial sniff - mine does). Once the fans are running, you may notice your hamster occasionally going around and sniffing at the air holes in the cage (if you mounted the fans so that they blow out). They notice the fresh air coming in. <br><br>My project lacks a switch. You can put one in if you like. I figured if I didn't want it running, I could just unplug it. The potentiometer gives me a small amount of control over fan speed, less important with a 5V supply but still nice. If you plug this into a 12V supply, you'll really need some control as it will be too much for the hamster. Choice of resistor size is up to you but I went with a 1.2k because I hate bright lights at night. I also strongly suggest using red for the LED so that it isn't annoying at night. The schematic is included in the pictures. I didn't draw up a protoboard schematic because that will be highly dependent on your protoboard. The little one I used is annoying so I don't recommend it, but it was nice to keep the project small. iPhone chargers seem perfectly fine with this kind of usage. If you're like me, you've managed to accumulate quite a few of them by now so you can spare one for something like this.<br><br>I thought of making a box for the protoboard. Maybe later.</p>
Creative Commons Attribution Noncommercial Share Alike