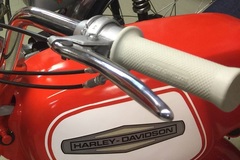 THERE IS NO LOGO OR TEXT ON THE FILES PUBLISHED! Back in the 60´s Harley Davidsson purchased 50% of Aermacchi's motorcycle division and contracted them to produce a series of smaller size motorcylces that would be part of the Harley Davidsson brand. One of those were the M50S, a 50cc 2-stroke bike which was manufactured during 1965-66 and approximately about 9000 where made. Many years later, in 2012 one of these found it´s way to my friend and moped enthusiast Daniel Pero. Needles to say it was in desperate need of renovation and Daniel being somewhat of a expert on the area approached the task "head on". Years went by and bit by bit the M50 was returning to it´s former glory. There was a problem though, it´s always tough to find spares and you have to be somewhat of a detective. And even though Daniel is a good one the badly worn handles were nowhere to be found. After having given up on the search Daniel asked if it would be possible to reproduce these handles using 3D Printing. As he had one of the old ones at hand this wouldn´t be much of a problem. Spending some time recreating it in CAD and making some small changes to make it better suited for the 3D Printing process all left to be done was to find a suitable material to print it with. Obviously wanting to get as close to the feeling of a original rubber handle it needed to be a soft "rubberlike" material and NinjaFlex TPE was the closest we could find. We browsed thru the colors available and found a color (concrete) that we felt was as close as we could get. With the material loaded, the file all sliced up and the 3D Printer ready to go, all that was left to be done was to let the 3D Printer do it´s magic! And we think it delivered. Daniel was happy with the result and the 3D Printed handles are in place on the now fully restored 1966 HD M50S. Just recently this beautiful "moped" was featured in Swedish "Classic Bike" magazine with a 10 page story and a front page! Thanks to Daniel Pero for providing the pictures! Like my FaceBook page - https://www.facebook.com/Daniel-Nor%C3%A9e-576194949211855/ Subscribe to my YouTube channel - https://www.youtube.com/user/DanielNoree2 INSTAGRAM https://www.instagram.com/danielnoree/ TWITTER https://twitter.com/DanielNoree GOOGLE+ https://plus.google.com/u/1/+DanielNoree FACEBOOK https://www.facebook.com/daniel.noree https://youtu.be/Xj4-QwFSMAE
Creative Commons Attribution Share Alike