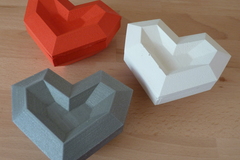 <p>Heart-Shaped Box - inspired by <a href="http://homemade-modern.com/ep72-concrete-heart-box/" target="_blank" rel="nofollow">http://homemade-modern.com/ep72-concrete-heart-box/</a> and Nirvana ;)<br><br>At 100% size the box is pretty small, if you want to store something bigger than a piece of paper or a really small gift you should scale the model up. The one I made is 140% which is still pretty small but perfect for me. The model should scale up pretty good, there are no difficult parts to print.<br><br>I split up the top piece in two parts so you can print it without any overhands or support material. Just align the holes in both pieces and glue them together. Preferable with some superglue so you get a tight fit.<br><br>The inner part of the top has quite a bit clearance to the outer box but if you cast this in concrete it will be easier to get it to fit. (I may upload a box just for 3d printing with tighter tolerances.)<br>Use the printed heart shaped as framing for the silicon mold tho you don't have to use huge amounts of extra silicon (that stuff isn't cheap). Cut them open after your silicon has hardened, if you are careful you can use them later for stabilizing your silicon mold during the casting process. (Or print new ones).<br><br>Tips:<br>- use a soft silicon<br>- you properly have to cut your silicon open to remove your parts (at least I had to)</p><p><br></p><p><b>Update</b></p><p>I added a version for 3d printing only. It has thinner walls and a better fitting top.</p>
Creative Commons Attribution Share Alike