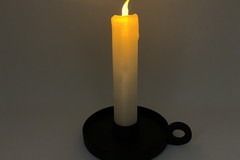 https://www.youtube.com/watch?v=RTVE4Ck8ZXA "Inductive Candle" is an inductively charged (similar to smart phone or watch "cable free" chargers) candle that automatically "lights" when removed from the charging base and "extinguishes" when returned to the charging base. The base assembly contains an inductive transmitter and coil and a 12mm diameter by 3mm thick neodymium magnet. The candle assembly contains an inductive coil and receiver, a lithium polymer battery charger, a lithium polymer battery, a 6mm diameter by 2mm thick neodymium magnet, a normally open reed switch, and a flickering LED. When the candle assembly is removed from the base assembly, the neodymium magnet in the candle assembly activates the reed switch which illuminates the LED using the LiPo battery as the power source. When the candle assembly is returned to the base assembly, the neodymium magnet in the base assembly alters the magnetic field of the neodymium magnet in the candle assembly deactivating the reed switch and extinguishing the LED while the inductive charging system charges the LiPo battery. Since the charging system utilizes air coil induction which is not as efficient as cable charging, the design extinguishes the candle when the candle assembly is returned to the base assembly for charging. I purchased the inductive charging system from Adafruit.com (I really like that place) who indicates the system will operate from 9 to 12vdc. When operated at 12vdc however, the inductive charging system generates heat that may be excessive for most PLA filaments. Using an IR thermometer I measured the temperature on "Base, Cover.stl" at 56° C (approximately 133° F) when using a 12vdc power source. Thus if you decide to use a 12vdc power source I recommend printing "Base, Cover.stl", "Base.stl" and "Lamp, Base Interface.stl" using Ultimaker CPE+ or equivalent filament having a higher temperature rating than PLA. And as usual, I probably forgot a file or two or who knows what else, so if you have any questions, please do not hesitate to ask as I do make plenty of mistakes. Designed using Autodesk Fusion 360 and Meshmixer 3.5.474, sliced using Cura 4.1 and printed in Ultimaker PLA and CPE+ filament on an Ultimaker 2+ Extended and an Ultimaker 3 Extended. One final note, I receive no compensation in any form whatsoever for the use of any of the components and/or materials used in this design.
Creative Commons Attribution Noncommercial Share Alike