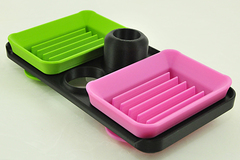 Fits a 25mm shower riser tube. Shower riser tube to wall clearance needs to be at least 25mm. 30mm recommended. The original shower soap holder was just a flat piece of plastic with a recess on either side for a bar of soap. After a few showers, the soap would block the drain holes and it would all turn it into a tray with two puddles of goo in it. I made my own tray where you can remove the dishes for easy cleaning. The colours of the trays were picked to match that of the soap - so the soap-dishes look cleaner for longer. The blades in the dishes allow air to get underneath a wet bar of soap and allow them to dry out after each use. The tray is tilted down at the front to encourage water to drip away from the wall. There are large rounded drip edges on dishes to allow water to drain out from all but the most caked-up dish. The drip edges also serve as a locator that stops them accidentally being knocked out of the tray. They are rounded to reduce the chance of injury. A compromise was that the bottom of the dishes are flat to allow easy printing without support that a hanging drip-edge would require, but the tray angle compensates for this. Support is needed however for the overhanging locating brim, but any mess this support causes is hidden in the recess. The tray was printed in rigid.ink Black ASA. ASA was used as the sun shines into my bathroom and there was a good chance the sun would bleach black non-UV-safe plastics. The dishes were printed in rigid.ink ABS (Colours: Olive Green, White, Pink) as they can easily be replaced if they fade. Another reason for using ASA and ABS was so that the parts could be easily acetone-vapour smoothed.
Creative Commons Attribution Noncommercial Share Alike