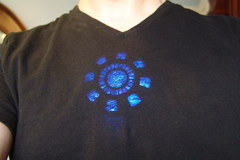 <p>I made this model and wore it to the SLC Comic-Con 2014. There are two models - the top cover and the "LED holder". The LED holder is more complicated than it needed to be, because I decided to add "dimming" of the LEDs, driven by a microcontroller. I didn't want to spend the money to make a circuit board, so the soldering was done on the back side of the LED holder.<br><br><b>Notes on building:</b><br>There are lots of holes for LEDs (I used blue). I wired them into 3 banks of LEDs. Since I used a microcontroller, I controlled the banks via MOSFETs, but if you just wanted to turn on the lights, you could just drive the LEDs straight off the battery pack. I kept the battery pack in my pocket, with a cable running up the inside of my shirt to the device. I used an elastic strap to hold the device in place (I ran the strap over one shoulder and under the other arm - running it across my chest made it look weird). I used a small amount of (unused) toilet paper on the inside of the top cover to diffuse the light. When I made it, I did not bother to add a back cover, so I had some electronics touching my undershirt. Over time, it felt a little warm, and tickled somewhat. I don't think the voltage was high enough to notice - I think it was simply something touching slightly.<br><br><b>Disclaimer:</b><br>I do not own the rights to the Marvel Universe. However, I made this model from scratch, by looking at pictures online.</p>
Creative Commons Public Domain Dedication