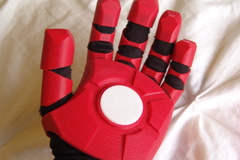 <div><p>I built this for Halloween. The electronics (not shown) would slowly brighten the LEDs in the palm, then activate the camera flash.</p> <p>Note that it takes a long time to render the OpenSCAD model of the glove (I think it was something like 45 minutes on my computer), but I've included it, in case someone wants to modify it for their own use.<br></p> <p><strong>Notes on building</strong> The light is made up 8 LEDs and a camera flash. The flash was separated from the rest of the camera electronics. The rest of the flash electronics (as well as a microcontroller to PWM the LEDs and trigger the flash) were in a (somewhat pretty) box mounted to my arm, with a cable running from that box to the glove.</p> <p>I bought an inexpensive glove, cut a hole in the palm so the cable could be routed through the glove (to hide the wires). I put velcro on the inside of the printed finger tips and the glove finger tips.&nbsp; Note that the velcro held up for the night of Halloween, but the "sticky side" doesn't stick all that well to fabric gloves, so if I were to do it again, I'd probably try to sew the velcro to the gloves.<br></p> <p><strong>Disclaimer</strong> I do not own the rights to the Marvel Universe. However, I made this model from scratch, by looking at pictures online.</p> </div>
Creative Commons Public Domain Dedication