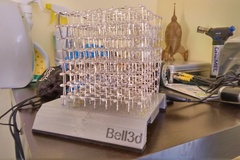 <p>This thing is a jig and stand for the LED kits available from Aliexpress (<a rel="nofollow" target="_blank" href="http://www.aliexpress.com/item/Free-Shipping-3D-Light-Squared-8x8x8-LED-Cube-White-LED-Blue-Ray-Kit-Christmas-Gift-3D/32311673719.html">http://www.aliexpress.com/item/Free-Shipping-3D-Light-Squared-8x8x8-LED-Cube-White-LED-Blue-Ray-Kit-Christmas-Gift-3D/32311673719.html</a>).<br></p><div><p>The jig is used to line up the LED faces so that you end up with a square cube at the end of the build.</p><p>The stand is eh...a stand.</p><p><br></p><p><strong>Assembly</strong></p><p>Print in ABS and acetone weld the parts together, or use PLA and SuperGlue (which is what I used on this build).</p><p>Because of the board layout on the supplied kit, I didn't mount the power input socket on the board, instead gluing it to a more convenient place on the rear stand leg, and running leads from the socket to the PCB.</p><p>In the pictures you can see that after mounting the board, I pushed stiff conductive wire through the holes into the anode receptacles on the PCB - in retrospect, if I assembled this kit again, I wouldn't bother with the receptacles, I would just push the LED anode legs straight into the PCD and solder them in place.</p><p>I also found it useful to glue the switch cover in place on the PCB mounted switch before mounting the board.</p></div>
Creative Commons Attribution Share Alike