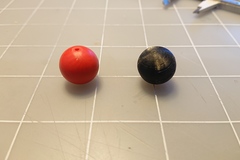 In the Lego Mindstorms EV3 set (#31313) there are three red plastic balls ("Technic Bionicle Ball", #54821) used as projectiles for a ball shooter ("Technic Bionicle Weapon"). As it can be expected they have an almost magical ability to disappear just to reappear in another part of a house or in a left winter boot stored in a shoe cupboard since the last winter. I designed this simple replacement piece to worry no more. I can always print some new munitions for my sons robot wars. In order to obtain a good geometry and surface finish I split the ball into two halves. They are assembled by press fitting the male and female halves together. I used a small vice with soft padding between vice and the part. I did not see a need for any glue but to be sure that the halves do not split a drop of CA glue can be added before joining the halves. Doe to a rougher surface the projectile to projectile shooting precision might vary more then for original parts. It is also recommended to smoothen the ball around the split line with a fine sand paper to avoid jams during shooting.
Creative Commons Attribution Share Alike