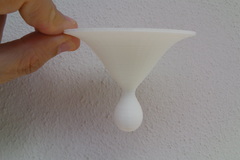 Drops of liquid are described by Laplace's equation. There's only one non-dimensional parameter beta that controls the shape of any drop, beta = g rho b^2/T where g= gravity acceleration, rho=density, b=curvature and T=superficial tension. The profile for each drop was obtained by numerically solving Laplace's differential equation[1] for the corresponding beta value and a simple GNU/Octave script for generating the final STL. beta>0 corresponds to standing drops, for beta<0 we have hanging drops and beta=0 gives a sphere. All the drops have a volume of 33510 mm^2, the same volume as the typical ping-pong ball ;) As a consequence all drops weight almost the same with 100% infill. The STLs files are for standing drops for beta=1, 10, 100 and for hanging drops beta=-1, -0.5, -0.35 Check the pics for a clear view. Have fun and enjoy your BIG drops! [1] "An attempt to test the theories of capillary action by comparing the theoretical and measured forms of drops of fluid. With an explanation of the method of integration employed in constucting the tables which give the theoretical forms of such drops" by Bashforth, Francis: https://archive.org/details/attempttest00bashrich
Creative Commons Attribution Share Alike