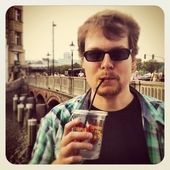 Meet LUMIERO a handheld DIY 35mm Projector you can build yourself.

LUMIERO is a small handheld 35mm projector I designed for a university course on "expanded cinema". It can handle up to 20m of film and uses a camera flash as lightsource(will be changed in future versions). With LUMIERO you as an artist are no longer bound to 24frames per second - you change the framerate simply by changing the speed in which you operate the crank.

The light will pulse once for every frame, eliminating the need for a mechanical shutter mechanism while ensuring perfect synchronisation between light and film.

Future versions might include a lightsound decoder for your beloved talkies.

This proof of concept still has some mechanical issues mainly with the geneva mechanism in different stages of projection, as well as no spooling mechanism so your film will end up on the floor.

--Credits--
Thanks to Lars Grochla for taking the primary image at the Hochschultage 2015 exhibition at Hfk Bremen.

Thanks to Mcinnes81, the pistol grip used here is a modified version of his design "Sony Action Cam pistol grip" at http://www.thingiverse.com/thing:153917

Thanks also to kellyegan, who created the original openScad file for the film-spools used "35mm film spool (variable sprockets)", find it athttp://www.thingiverse.com/thing:28236.

Note: This whole thing is licensed as CC-BY-NC-SA, except for two parts - the film-spools and the grip are licensed CC-BY-SA (http://creativecommons.org/licenses/by-sa/3.0/) according to the license of the original parts by kellyegan and Mcinnes81

Nuurs added this to the Cool collection about 2 years ago

Slanger added this to the Photo collection over 3 years ago

Florian L. published this design over 7 years ago