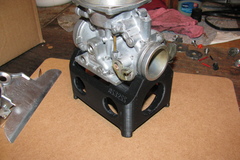 <p>One of the difficulties of removing the idle mix screws from the Mikuni BS carbs is getting a grip on the thing while holding the screwdriver straight and applying enough force to keep it engaged while applying torque to turn it. Knowing that in advance, and not minding spending an evening with SolidWorks, a set of calipers and a carb body, I made a jig to hold the carb relatively securely.<br><br>This works pretty well. I was able to remove the screws from the first two carbs by leaning on the end of the screwdriver with my chin and working the screw back and forth until it came out. After two, my chin was sore. It peeled like a sunburn a couple days later. A week passed and I had the idea to chuck a screwdriver bit into the drill press and use the mechanical advantage of the quill feed to really get things working. Also, the bit would automatically be held straight. This worked very well on the #3 carb, which had already had the screw slot rounded. You can see the screw, and how much torque I was able to put on the bit.<br><br>Using the drill press, I was able to remove the screw, even with the bit shown. It was straight before I started. Since body of the chuck is much larger than a screwdriver handle, you can pretty easily put a lot of torque into the bit. But even using a bit I hadn't realized was damaged, I was easily able to apply enough force with the quill to keep the bit engaged in the rounded-out screw slot.<br><br>The jig says BS32SS on the side, but a BS34SS fits into it just fine. The same thing could probably be done (probably has been done) with a few blocks of wood.<br><br>Something to try before cutting a slot through the tower and screw. A better quality bit that the one I used from the checkout line at ACE hardware would probably stand up to the torque.</p>
Creative Commons Attribution Share Alike