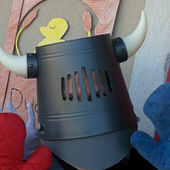 I made these as a way to teach my daughter about atoms and molecules. I have created models for carbon, nitrogen, oxygen, and hydrogen, as well as double bond versions of the carbon, nitrogen, and oxygen. There are versions with letters on them ("H" for hydrogen, "O" for oxygen) as well as versions without. Each bond has a flat side where it attaches to adjacent atoms, and the diameter of that flat area is the same for all single bonds, and different from double or triple bonds. Double bonds have a slightly larger diameter, and are also indicated by a ring around the bond connection. Triple bonds are slightly larger still, with two rings around the bond connection.  I printed carbon atoms in black, nitrogen in blue, oxygen in red, and hydrogen in white.

All of the atom models are generated from the same OpenSCAD file, using the batch mechanism (which is really nice, by the way). The OpenSCAD model has a definition for each molecule type, so if you want to create more molecules, you can add new definitions. The batch file is included, and generates all of the models (it takes a while to generate them all).

I printed these with minimal infill and with no supports, then put them in an acetone vapor bath to smooth them out.

For connectors, I used toothpicks that I already had in the pantry. Mine had about a 2 mm diameter. Then I cut them to about 16 mm long. I also created a model for the connectors, and I have also used those, though I like the toothpicks better (they are easier to turn, and they are stronger).

GerardSob added this to the Ciències collection over 3 years ago

jaapaap added this to the toys collection over 3 years ago

MariaAlda added this to the Laboratorio collection almost 5 years ago

erinmaranda added this to the School collection over 5 years ago

chapelmagine added this to the mine collection over 5 years ago

konsdibons added this to the helpful collection over 5 years ago

konsdibons added this to the curious collection over 5 years ago

Johan W. Klüwer added this to the remember these collection about 6 years ago

Very nice set. One improvement could be that instead of toothpicks, one can use magnets. Good work!

Da6oN added this to the SCIENCE collection about 7 years ago

excite published this design over 7 years ago