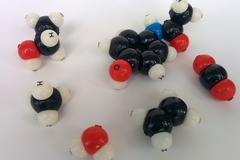 <p>I made these as a way to teach my daughter about atoms and molecules. I have created models for carbon, nitrogen, oxygen, and hydrogen, as well as double bond versions of the carbon, nitrogen, and oxygen. There are versions with letters on them ("H" for hydrogen, "O" for oxygen) as well as versions without. Each bond has a flat side where it attaches to adjacent atoms, and the diameter of that flat area is the same for all single bonds, and different from double or triple bonds. Double bonds have a slightly larger diameter, and are also indicated by a ring around the bond connection. Triple bonds are slightly larger still, with two rings around the bond connection. &nbsp;I printed carbon atoms in black, nitrogen in blue, oxygen in red, and hydrogen in white.<br><br>All of the atom models are generated from the same OpenSCAD file, using the batch mechanism (which is really nice, by the way). The OpenSCAD model has a definition for each molecule type, so if you want to create more molecules, you can add new definitions. The batch file is included, and generates all of the models (it takes a while to generate them all).<br><br>The naming convention for the STL files is as below:<br>XXXX_YYYY_ZZZZ.stl<br>&nbsp; XXXX is the model type, such as "Hydrogen" or "CarbonDbl".<br>&nbsp; _YYYY of "_wText" indicates that the atom identifier is present - if missing, there is none.<br>&nbsp; _ZZZZ indicates that how many atoms are in the STL file, such as _25 for a 5x5 grid of atoms. If it is missing, there is only one atom in the STL file.<br><br>The atoms that I built models for are:<br>Hydrogen<br>Oxygen<br>OxygenDbl (oxygen with a double bond)<br>Nitrogen<br>NitrogenDbl (nitrogen with a double bond)<br>Carbon<br>CarbonDbl (carbobn with one double bond)<br>CarbonDblDbl (carbon with two double bonds)<br><br>I printed these with minimal infill and with no supports, then put them in an acetone vapor bath to smooth them out.<br><br>For connectors, I used toothpicks that I already had in the pantry. Mine had about a 2 mm diameter. Then I cut them to about 16 mm long. I also created a model for the connectors, and I have also used those, though I like the toothpicks better (they are easier to turn, and they are stronger).</p>
Creative Commons Public Domain Dedication