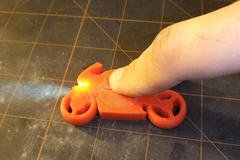 <p>I'm always a fan of having handy flashlights on my keys, I find plenty of uses for them. I've taken Roland's motorcycle keychain and modified it so it can house an LED light! The only things you need, other than printing the plastic parts, are an LED, a small plastic tube to insulate one of the LED leads, and one or two batteries of either CR2032 or CR2016.<br></p><p>After a little experimentation, I found it is easier to assemble if your batteries are facing negative side up, and the button feels better if you clip the top LED lead short enough that it just crosses the center of wedge on the underside of the button.</p><p><br></p><p>INSTRUCTIONS</p><p>All of the parts, except the plastic printed parts, should be easily found in your local Radio Shack (USA) or electronics store.<br></p><p>First, you will want to decide which way to insert your batteries, this depends on which direction you install your LED. Once you have decided that, you will want to take your little plastic tube and put it on the top lead of your LED. This plastic tube prevents an electrical connection between the LED and the corner of the top most battery. If you don't use the plastic tube, chances are your LED will always be lit even without pressing the button. Now insert the LED in through the battery opening of the keychain and push it into place. It should be snug enough that the LED won't just fall out. Insert one or two batteries as explained above. Here, you may want to adjust the bend in the top LED lead so it is parallel with the top battery, but doesn't touch it. At this point, you should be able to push the top lead down until it touches the battery and the LED should light. Snap on the cover, making sure that the top LED lead sits underneath where the button is going to be. Once the cover is snapped into place, the LED should not be lit by itself; it should light when you apply pressure to the button. Attach the key ring around the rear tire and put it on your keys!<br></p><p>The keychain shell also includes a very small, but handy, hole on the bottom. If you ever need to remove the batteries, you can push a pin or something through it to help you get them out.</p>
Creative Commons Attribution Share Alike