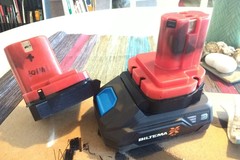 NiMh battery to Li-ion conversion and other stuff!

I got two perfectly fine makita power tools using the old NiMh post-style battery. Even if you find new batterys NiMh is way less effective as Li-ion. When Biltema launched their 18V MultiX system it became affordable to convert power tools to li-ion (instead of buying new tools). And while the base model for the battery interface was done it could be used for other useful stuff. It's a system to build on. **WARNING! Running li-ion batterys without monitoring them may cause death and destruction, both to you and your tools. Be smart!** These batterys are also branded and sold by Draper and Sealys. Possibly more brands. I started by making wooden prototypes, they turned out well so I still use the on my tools! So that's another possibility if you want to. UPDATE: I have added a template for the copper or aluminium terminals I use with this battery holder. I've also now converted one weed whacker from ryobi and a glue gun. These work very well with this adapter also.
Creative Commons Attribution Share Alike