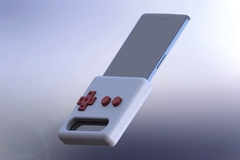 <p>I enjoy playing games on my phone but sometimes I miss physical buttons. I thought there must be a way to just put a sleeve or case on your phone to allow you to have physical buttons. I have created the parts that can be 3D printed to create a sleeve that allows you to have physical buttons. This was meant mostly to be used on emulators to play older games with few buttons.</p><p>The system isn't functional without the rubber buttons (shown in picture) I pulled from a Super Nintendo controller I bought off ebay and something to make the buttons work on the capacitive screen. Essentially the 3d printed buttons will compress these rubber buttons. I'm hoping to have something places inside these rubber buttons that will register on the capacitive screen. This has been harder than I thought.</p><p>My problem arises with getting the screen to recognize button presses. I tried using tin foil but it wouldn't register when I pressed a button. I know you can get capacitive paint. Not sure if it would work. Any ideas would be great.</p>
Creative Commons Attribution Share Alike