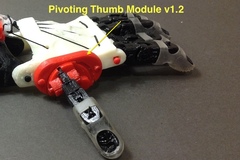 <p> </p><p>Updated again to version 1.2, the newest Thumb Module has only 2 printed parts: the Body and the Pivot. However, a spring has been added to the ball detent and a peg made from 3mm filament holds the pivot in place on the Body. &nbsp;</p><p>Updated to version 1.1, the new thumb module is narrower than the prior version and it does not interfere with thumb flexing. &nbsp;Positions stops are printed in and no longer require use of a 3Doodler. </p><p>The Pivoting Thumb Module is an experimental accessory for the Raptor Hand <a target="_blank" rel="nofollow" href="https://www.youmagine.com/designs/the-raptor-hand-by-e-nable">https://www.youmagine.com/designs/the-raptor-hand-by-e-nable</a></p><p>Examples of two-handed tasks include things like putting toothpaste on a toothbrush, opening a jar or cutting something with a knife or a pair of scissors. <b>The volunteer e-NABLE community has developed several designs for prosthetic hands for people who are missing fingers, but have a partial palm and a working wrist. </b> The current e-NABLE hands use wrist flexion to provide enough functioning of the prosthetic fingers to make some two-handed tasks easier for the user. <b>However, </b>t<b>here are other two-handed tasks that benefit from a second orientation of the thumb. &nbsp;</b><br></p><p><b></b><br></p><p><b>Credits:</b></p><p>The Pivoting Thumb Module was designed for the<b> </b>“No Thumb” Palm of the <b>Raptor Hand </b>and the STL files for the Raptor Hand can be downloaded here: <a target="_blank" rel="nofollow" href="https://www.youmagine.com/designs/the-raptor-hand-by-e-nable">https://www.youmagine.com/designs/the-raptor-hand-by-e-nable#!design-documents</a><b>. &nbsp; </b>The adaptive tensioner was derived from a concept by <b>Steve Wood</b>&nbsp;<a target="_blank" rel="nofollow" href="http://www.thingiverse.com/thing:392970">http://www.thingiverse.com/thing:392970</a>&nbsp;<b>&nbsp;</b>The value of a pivoting thumb was originally explained to me by <b>David Dietz</b>. The development was conducted at the <b>e-NABLE Lab at Rochester Institute of Technology</b>. <b> </b>&nbsp;</p> <p><b>Background:</b><br></p><p><b>The user’s residual palm fits into a mitten within the prosthetic’s palm, while a “gauntlet” straps onto the user’s forearm.</b>&nbsp; Strings serving as tendons are attached to the gauntlet and they pull the fingers and thumb of the prosthetic into a grasping position when the wrist is flexed. Elastics open the grip when the wrist is returned to an extended position. &nbsp;</p><p><b>Most of the e-NABLE hand designs have the thumb oriented to serve two of the three basic thumb positions. </b> In the Opposition Position, the thumb opposes the palm in a powerful grip and and it is good for tasks like holding a jar while the lid is being removed or replaced. In the Tripod Position, the thumb contacts the forefinger and middle finger for grasping small objects. The e-NABLE hands serve both the Opposition Position function and the Tripod Position function quite well for many users.</p><p><b>The third position is called the Pinch Position and the thumb is parallel to the edge of the palm.</b>&nbsp; This position is most useful for tasks like holding a key or a card or holding a fork to steady a piece of meat while the user cuts it with a knife in the other hand. &nbsp;</p><p><b>The Pivoting Thumb Module allows the user to conveniently switch between the Opposition/Tripod Position and the Pinch Position. </b>&nbsp;</p><p><b>Example task:</b>&nbsp;</p><p>Suppose a child wanted to <b>make peanut butter crackers for a snack</b>. The prosthetic hand in <b>the Opposition Position can hold the box while the crackers are removed</b> and put on a plate. Then the Opposition Position is <b>also good for holding the peanut butter jar while removing the lid.</b>&nbsp; However, shifting to the<b> Pinch Position is best for holding the knife to scoop peanut butter from the jar, then spreading it on a cracker</b> being held by the primary hand. The Pivoting Thumb Module allows the user to<b> switch back to the Opposition Position to put the lid back on the jar</b> and to close the box of crackers.</p><p><b>The Pivoting Thumb Module provides an accessory for standard Raptor hand</b> (using the thumbless palm, left and right are mirror images). The Pivoting Thumb Module STL files are provided at 100% on the e-NABLE “Handomatic” scaling tool, and it can be scaled to match the Raptor hand appropriately. </p><p> </p><p><b>This early publishing of the design is for the benefit of e-NABLE Research and Development</b> in our volunteer community. Assembly instructions will be added soon. The documentation for the Pivoting Thumb Module will be supplemented in the coming days and the design will be iterated in the coming weeks. </p>
Creative Commons Attribution Share Alike