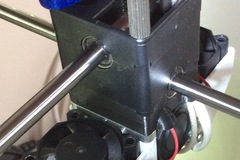 <p>Following on from Jamezracer's Fan Duct, I didn't want to alter my original part so I downloaded the STEP file from GITHub and modified it so that there are two lead scoops at the rear allowing the wires for the Heater, Temperature sensor and fans to exit at the rear over the back of the Heatsink fan.</p><p>I have also redesigned James' Fan Duct to round the back edges off so that any body that has the modified Cooling Fan Duct that swivel away on the rear two long knurled screws can use this to allow them to still swivel, although you may need to remove 1 edge on the Cooling Fan Duct with a file you will see which edge when you go to refit it and it only takes a minute or two to alter.</p><p>The photo shows a couple of long M2.5 screws being used with nuts to hold the fan in position, new screws are on order from ebay and photo will be added when fitted.</p>
Creative Commons Attribution Share Alike