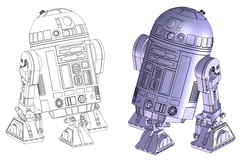 Another character of the epic Star Wars series, R2-D2 drawn in 3D. It (again) took quiet a while to get this far but I feel it's good enough to be printed now.It's optimized for the Ultimaker and split in 12 parts (V1) or 16 parts (V2, see comments below). Other than the AT-ST Walker this one is drawn from scratch resulting in an easier to adjust model.<br><br>In 100% it will be A3 paper size when assembled! Feel free to scale down though :-)<br><a rel="nofollow" target="_blank" href="http://en.wikipedia.org/wiki/R2-D2">http://en.wikipedia.org/wiki/R2-D2<br></a><br>Good&nbsp;luck printing!<br><br><i><u>PS: This design is only available on Youmagine</u></i><br><br>Revisions:<br>28-8-2013: Dome V1 is split into 5 pieces to minimize parts with overhang (Dome V1 had quiet a few).<br>NEW PARTS ARE: Dome V2.stl, Lens dome V1 (3x).stl and Dome front lens V1.stl<br>Since Cura's multi-part printing is working just great there's no reason to not split it :-) Thanks Daid &amp; Ultimaker!<br><br>3-9-2013: I printed all parts at 50% and found a few things were not printed as hoped. The middle foot part (V2) had multiple issues so I made a new version of it. Improvements on this part include: increased wall thickness, better inner structure, stronger detail effects.
Creative Commons Attribution Noncommercial Share Alike