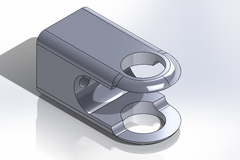 Here is a concept demo of the knuckle joint feature, similar to what you will find on the Raptor, and others. If you have printed a hand yourself, then you are already aware that the finger tips pose a challenge to print. The overhang or the "fingernail" area is so shallow, that you get severe curling at the edge, which ultimately leads to a catastrophic collision with the nozzle. Or it just looks bad. What I have done is to introduce a set of support features into the part, that allow for the finger to be printed on its side. Adhesion discs (0.2mm) at the base, prevent curling up of the first layers. Single walled (0.3mm) support tubes provide a non-warping support structure for the knuckles to print on. The resulting part has a much stronger joint, because it is printed perpendicular to it motion axis. Like I said at the start, this is just a concept. The part is not intended to replace any part of an existing design, but rather to spur further discussion, and hopefully lead to some innovative changes moving ahead. Print one for yourself, and let me know what you think.
Creative Commons Attribution Share Alike