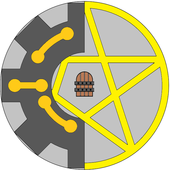 A case for mounting a raspberry pi 3b+ on a cyberdeck mod.

I've been going through a lot of Cyberpunk media lately (hmm, wonder why) including Neuromancer. Around the same time, I decided I wanted to build something with a Raspberry Pi. Between reading/watching some of the stuff related to the Cyberpunk tabletop RPG, Shadowrun, and Neuromancer, I thought it would be interesting to make my own "cyberdeck". I also thought it would be interesting, taking advantage of the rocker side of the genre, to put it into/on a keytar. The idea was that a decker or technomancer could disappear into a crowd more easily after a run, slinging their deck over their shoulder and pretending (from a distance) that they are just another rocker in the crowd.

I couldn't find an actual keytar for a price I was willing to pay, but I did find out that there was a Rockband 3 keytar controller that was big enough for most of it. I've gutted it, and I'm in the process of figuring out the internals and tray so I can mount a computer keyboard where the piano keyboard was supposed to go.

There isn't room inside the case for the actual pi and screen, so I'm mounting it externally, hence this file.

for my Raspberry Pi 3 B+. It's allowed me to attach a screen to it, some heat sinks, and carefully protect my Pi. However, I'm unwilling to use it's built in mounting points, especially since I plan to periodically modify this whole setup. So, I've designed a case that is currently on my printer that the other case will slip inside, with the dongles and cables on the sides preventing it from slipping out accidentally. I've also put in the holes for the mounting screws into the design, and added points for a later design to connect into this later to cover up where the SD card extension cable and the power cable exit the keytar case.

The screws I'm using are #6-32 x 1/2 inch flat head phillips machine screws (at least I think so... apparently in opening the bag of screws I've distorted the section that says what kind they are).

I'm periodically updating my status and the steps I'm taking on my blog, which can be found here:

This is designed for a Raspberry Pi 3B+, with a screen and case. This case, specifically: https://www.amazon.com/gp/product/B07N38B86S/ref=ppx_yo_dt_b_search_asin_title?ie=UTF8&psc=1 I use an assortment of lengths of #6-32 stainless steel flat head machine screws, nuts, and washers for all the screws on the keytar.

Ralnarene published this design about 2 years ago