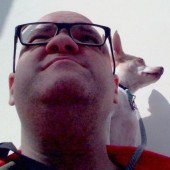 This is a modern design take on a rice cooker measuring cup.

Rice cookers are awesome, but they come with a little plastic cup for measuring rice that is actually calibrated in an archaic Japanese unit of measurement called a Gō that doesn't match any other measuring cup in your kitchen. So if you lose the cup, you're kind of screwed.

It's really the ratio of rice and water that's important, but my rice cooker has marks inside the bowl for quantities that indicate number of little rice cups. So the little cup is super convenient but I didn't really feel like paying too much for a new cup or buying a new rice cooker. So I researched the right size (it's approximately 180 ml, or a bit more than 3/4 of a cup) and designed it in OpenSCAD.

And because I could, I made it all fancy minimalistic looking so that you could leave it on the counter without it looking like you didn't put away the rice cooker measuring cup.

You can change the base size, angle of the sides, thickness of the walls, and volume (if, say, you wanted to make a shot glass).

bangsplat published this design over 6 years ago