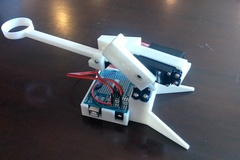 <p>This is something that I made for a Cub Scout "Invention Convention" pack meeting. At one station, we taught the kids to use TinkerCAD (<a href="http://www.tinkercad.com" target="_blank" rel="nofollow">www.tinkercad.com</a>), which is a very easy to learn, useful, free, online CAD package, which I used to design the 3D printed parts for this (both so I could learn, and to show the kids that you could do something engineering-like with it).&nbsp; At another station, we taught the kids to program these simple robots, using a graphical programmer for Arduino called Modkit.&nbsp; <a href="http://www.modkit.com/micro" target="_blank" rel="nofollow">http://www.modkit.com/micro</a> is the link for the Arduino programming software, which is free at the time of this writing.&nbsp; Side note, at the third station, we taught them to solder a simple flashlight circuit, and I am happy to say that I was the only person burned (and then only slightly) by a 9-year-old handling a soldering iron.&nbsp; No cub scouts were harmed in the making of these flashlights.&nbsp; :)<br></p><p>I didn't feel that I could get the resolution that I needed for the servo horns, so I just hot glued the servo horns to the 3D printed pieces.&nbsp; Something else that is not obvious from the picture is that I placed a small triangular piece of foam behind the bottom end of the ping-pong-throwing arm.&nbsp; This makes the arm throw at about a 45 degree angle, but doesn't cause any sharp impacts.<br></p><p>There are attached pictures showing the circuit, but there is one important note.&nbsp; The Arduino (in my experience) will not provide enough current to drive the two servos, so I added a separate power supply for those.&nbsp; Before I did that, the servos would cause the Arduino to reboot randomly.&nbsp; Because of where I soldered the servos (on the 5V supplied from the Arduino), I needed to cut that trace, or I expect that I would have let the magic smoke out of the chip.&nbsp; So, I would suggest one of two things.&nbsp; Either cut the 5V trace as I did, and as shown in the picture, or solder the servos in a different spot.&nbsp; <br></p><p>For the 5V servo power supply, I used a 3-pin keyed header, so I wouldn't accidentally plug it in backwards.&nbsp; However, you could also cut off the end of the wall wart, and solder it down.&nbsp; Note that to power the Arduino as a whole, I used the USB cable, since I needed that anyway to program the Arduino.<br></p><p>In terms of wiring, I put the servos on pins 10 and 11, and the switch on pin 7, but these were mostly arbitrary.</p><p>I'm not going to give a full tutorial on Modkit but here are some steps.&nbsp; Once you have it installed, open Modkit Micro, and select your Arduino (it should auto-detect it if it's plugged in).&nbsp; Then you need to configure your hardware on the "Hardware" tab.&nbsp;&nbsp;So drag a servo from the left panel only the main area on the right, and select the pin you have connected (pin 10, for example).&nbsp; Same for the other servo and the switch (button).</p><p>Then select the "Blocks" tab and start dragging blocks from the left panel to the main area on the right.&nbsp; It's kind of like Lego Mindstorms, if you've used that.&nbsp; One thing a really liked about it, is that the various pieces have different shapes, so that you can tell where they go.&nbsp; For example, the "if" block has a diamond-like shape for the "comparison", and there are a bunch of diamond-like shapes which are a comparisons, and you pick one, and drag it into the correct spot.</p>
Creative Commons Public Domain Dedication