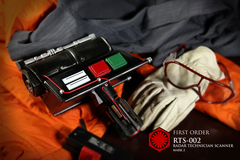 RTS-002 (Radar Technician Scanner Mark2) This device is used by certified radar technicians on all First Order land or space-based transportation and military base support. It is designed to help quickly diagnose and repair flaws in the complex radial patterns that are produced when locating and tracking various types of vehicles and life forms.&nbsp;<div><br><div><br></div><div>This mark 2 design was implemented as a mandatory replacement for the mark 1 due to numerous flaws in design and functionality that was discovered by First Order leader Kylo Ren after his experience using the device during an undercover Starkiller Base recon operation as a radar technician.</div><div><br></div><div><br></div><div>Since implementation, there has been a lot of disagreement from First Order radar technicians about the new scanner and have expressed frustration that the functions are more cumbersome than the original design and have other highly questionable features that are deemed unnecessary, such as a described "loud creepy and raspy voice" that indicates when a scan completes as well as another button that no one in the First Order can explain, only that it produces what some call a strange electronic breathing sound with no known diagnosis or repair function. First Order Leader Kylo Ren refuses to discuss making any further changes to the design and has threatened sanitation duty to anyone who argues against any aspect of it.&nbsp;</div><div><br></div><div><br></div><div>Note from the designer - Kylo Ren "The radar scanner I have put in place within the First Order is something I am most proud of. I would consider this to be the Grandfather of all scanners we have ever produced. I am also satisfied in how simple this device is to use. With a simple voice command 'Show me', the device will scan for any and all problems known from our vast troubleshooting holocron and then uplink to the scanner the most effective solution to mitigate error on the technician's part."&nbsp;</div><div><br></div><div><br></div><div>Case Study - Anonymous First Order Radar Technician** This has to be one of the worst updates I have ever seen made to our scanners. Before the mark 2, we had a simple one-button diagnosis with a singular holo-readout that mapped out the source for where radar pulse blackouts happen. The mark 2 doesn't completely work right. Also In the instruction guide there is supposed to be this 'show me' command, but it doesn't do anything! It just sits there and never comes back with a proper diagnosis. I feel like i'm staring at something that adds no value to my job. Thankfully the green button is there as a manual press function that the mark 1 had. The scan confirmation voice feedback thing is very annoying and loud. There is no way to override it into a silent mode. One of the buttons sounds like someone having a severe case of a loud breathing and have yet to get any answer as to what that even functionally does for us technicians. No one can give me a straight answer on this and rumor is the last person who did know this scanner inside and out was killed in an unfortunate freak accident in the manufacturing unit which also destroyed every mark 1 scanner and device blueprint to make more, so without a proper field testing area we continue to have to use these scanners without full training on the device.&nbsp;</div><div>&nbsp;** The anonymous individual is now deceased.</div></div>
Creative Commons Attribution Noncommercial No Derivatives