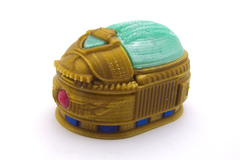 The scarab beetle is a small model with a secret compartment which is accessed by pulling back a "drawer" and opening up the beetle's wing case. The box is locked by closing the wing case and pushing the drawer back into place. This model is styled after the "Egyptian Revival" of the 19th and early 20th centuries rather than Ancient Egypt. For more information, please this excellent page <a rel="nofollow" target="_blank" href="http://www.metmuseum.org/toah/hd/erev/hd_erev.htm">http://www.metmuseum.org/toah/hd/erev/hd_erev.htm</a>. It is worth researching this style as it is beautiful and striking. To the ancient Egyptians, the scarab beetle was symbolic of the sun (Ra) moving across the sky every day (the beetle rolling a ball of dung was seen to represent this). My model has a stylized beetle with a winged Ra between his two front feet. The model consists of 12 parts which must be fitted together. Assembly instructions are here: <a rel="nofollow" target="_blank" href="http://www.instructables.com/id/The-Scarab-Beetle-Box-Assembly-Instructions/">http://www.instructables.com/id/The-Scarab-Beetle-Box-Assembly-Instructions/</a> UPDATE: I have uploaded a new version of the drawer file after it was noted that the drawer was too loose and would tend to fall open. The new file has less tolerance and testing so far shows that it stays in place.
Creative Commons Attribution Noncommercial Share Alike