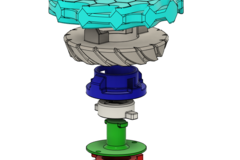 My son loves his Beyblades. But he wanted some custom designs and he wanted to modify his existing Beyblades. So I designed a compatible set of parts that can interlock with all his existing Beyblades. We have even printed some replacement parts for his official ones that have been damaged from battling. I have include the native Solidworks files, as well as conversions into Step, X_T, Fusion360, STL, and 3MF. I also create a Minimal assembly with only the basic geometry of the interlocking pieces. This version should make it easier to use as a starting point for your own remixes. Hopefully you can use these files as a jumping off point for your own designs.
Creative Commons Attribution Share Alike