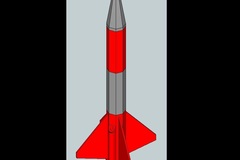 Simple, eight-sided model rocket designed for nose cone separation after timed delay. Uses Estes C6-3 or C6-5 Engines.&nbsp;<i>Have Fun</i>.&nbsp;My kids enjoy these and like creating their own in various colors and fin designs.&nbsp;<br><br>This simple rocket stands approximately 300mm (12 inches) tall and has a 30mm (point to point) body diameter. The fins span 130mm.&nbsp;<br><br>The base has an integrated rod guide and four fins. The nose cone is hollow and could carry a small (lite) payload. The upper stage is hollow and would contain the parachute or ribbon streamer to slow the descent. The lower stage and nose cone cap have attachment points for the tether. The engine cap twists on to prevent engine blow-out during parachute charge.<br><br><b>ALWAYS LAUNCH SAFELY AND IN OPEN AREAS.&nbsp;</b><br><br>Additionally provided files with included supports and fin supports for easier printing.&nbsp;<br><span><br>Nose cone, Upper stage, and the Lower stage (with supports) all print with out additional supports. I used a 0.3mm layer thickness, 15% infill, and two perimeters / shells.&nbsp;</span><br><span><br>Base (with fin supports) at 0.3mm layer thickness, 15% infill, and two perimeters / shells. I printed with supports for the first 20 layers.&nbsp;</span><br><span><br>Nose and engine caps were both printed with 0.2mm layer thickness and 100% infill using supports.&nbsp;</span><br><span><br>Print all six parts and remove break-away supports. If desired, complete any finishing techniques. Ensure the nose cone and cap will deploy from the upper stage smoothly. Sand if needed for fit.&nbsp;</span><br><span><br>Glue the base to the lower stage. Attach the tether to the lower stage and pull through upper stage. Glue upper and lower stages together. Affix the other end of the tether to the nose cone cap. Glue or attach the the nose cone and nose cap.&nbsp;</span><br><span><br><i>I usually print extra engine caps to have on hand if the rocket blows it out during the parachute charge</i></span>
Creative Commons Attribution Noncommercial Share Alike