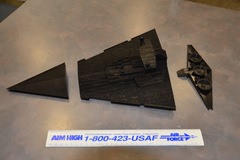 I wanted to do something fun to demonstrated to students that you could build something beyond the build volume of the printer. So I started with the hull and based it off of the University of Sydney drawing found in Google images. It had clean lines and offered something I could put a ruler to. So the design is a one to one with the drawing printed out on 11x 17 paper. Then I loaded it into Cura rotated to a 45 degree angle and hit the max button. The width was the largest dimension so it is as wide as the Ultimaker 2 build plate will allow. I quick printed it in black PLA using the normal print option with support touching the build plate. You need the support for the two defector shield generators on the top of the bridge and some of the laser turrets on the hull. 26 hours later I used the ruler on the completed hull to determine the size of the nose and used the scale function in Sketch Up to resize the nose to match the hull and 11 hours later the nose is ready to be glued to the hull. Lastly I designed the engines and printed those after doing the scale function to make it match the bottom of the hull. I did run into a problem here it seem to take the hight out of alignment by 2 mm. So I went back and shaved 2mm off the top of the tail, reprinted, 8 hours later everything came out fine. Layer hight was .1 Shell thickness was .8 retraction enabled Bottom/ Top thickness .8 Fill density 10% Print speed 50mm/s Nozzle .4 Support: Touching build plate The picture shows the engines upside down and I'm not sure on how to change that. I also realize that this design could have a lot more detail in the surface of the hull and on the bridge, I just ran into a time crunch and had to print, so I am leaving this open so others can work on it and hopefully fully flesh out all the cool little details.&nbsp;
Creative Commons Attribution Share Alike